My name is Gergana Mihaylova, but all my friends and family call me Gerry. I was born in Sofia, Bulgaria, on April 26, 1981 – it was Easter Sunday! I had a happy and healthy childhood, surrounded by love and attention. As I grew older, I learned that I could do anything with a lot of hard work and faith. I never give up! I love the beauty and music of life. I believe in miracles and that good things always come. I say all this because I think it is of great importance to the story that I am about to tell you. 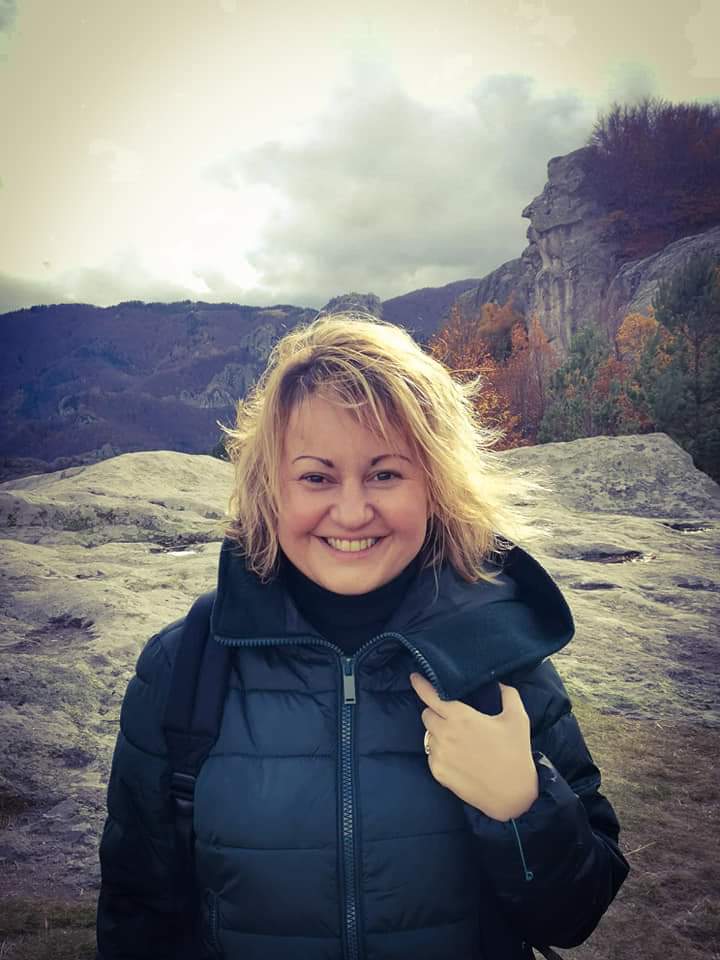 It all started in the spring of 2017. A small swell appeared in my right temple. I thought it was a consequence of being hit. I had no complaints, but decided to consult it with a doctor anyway. And so my “adventure” began.
The various examinations I did showed that there was a problem, but I didn’t know how serious it was until the swelling started to increase in size to the point it “poured out” and changed the shape of my head.
My first surgery was performed in July by the neurosurgeons at Tokuda Hospital in Sofia. They removed a tumor that showed to be malignant. I was recovering very fast, all my examinations at that point were good, and I felt healthy. I sought the advice of a number of specialists and so I decided to go to Turkey for treatment. I was prescribed radiotherapy there. I passed this ordeal with the support of my family, friends and colleagues. My follow-up examinations showed that there was no trace of the tumour. So, after months of “walking through the pain”, I went back to work. Life went on! 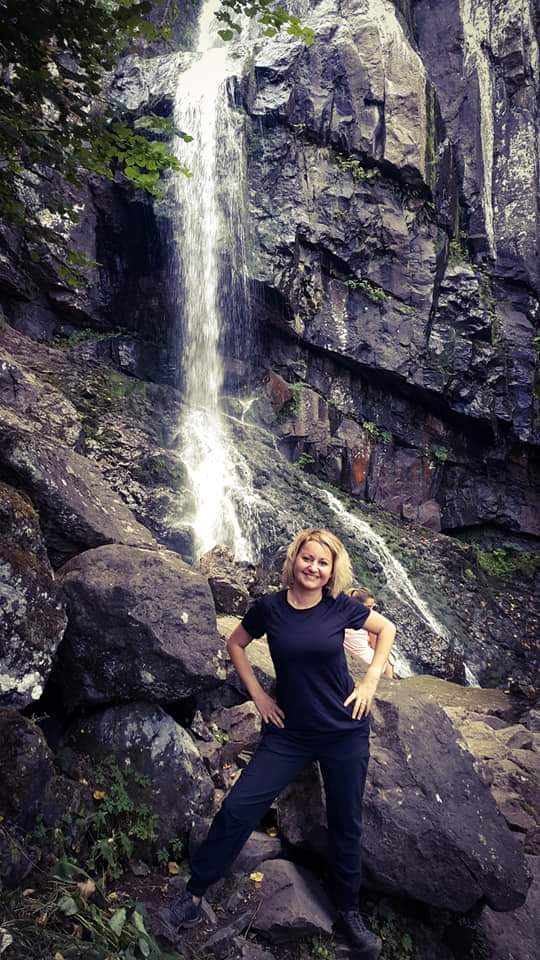 But fate, or Providence, had prepared for me a nightmarish sequel.
In March 2019, during an MRI check, the radiologists noticed that something was out of place compared to my previous MRI. So it all started again from the beginning…
Two months of consultations, research, and a second operation in May – this time I chose Memorial Hospital in Istanbul. The histology report confirmed the diagnosis: osteosarcoma (a type of bone cancer).
I am grateful for the attention and attitude of the entire team and personally of Prof. Dr. Gökhan Bozkurt. It was him and Prof. Fazilet (radiology) who advised me to continue my treatment as soon as possible with proton therapy. Unfortunately, they did not have this technology. In Bulgaria, neither.

As soon as I got back to Sofia I started looking for information. I had all the necessary medical documentation translated to several languages, which I then sent to numerous European proton centres.
Naturally, I also continued with my control examinations. In less than three months the radiologists saw again a new “thing” growing.
An urgent third surgery followed and, a week later, a fourth smaller nasal aeration. Back in Turkey. Back in the same clinic. And again the same recommendation: EMERGENCY PROTON THERAPY! 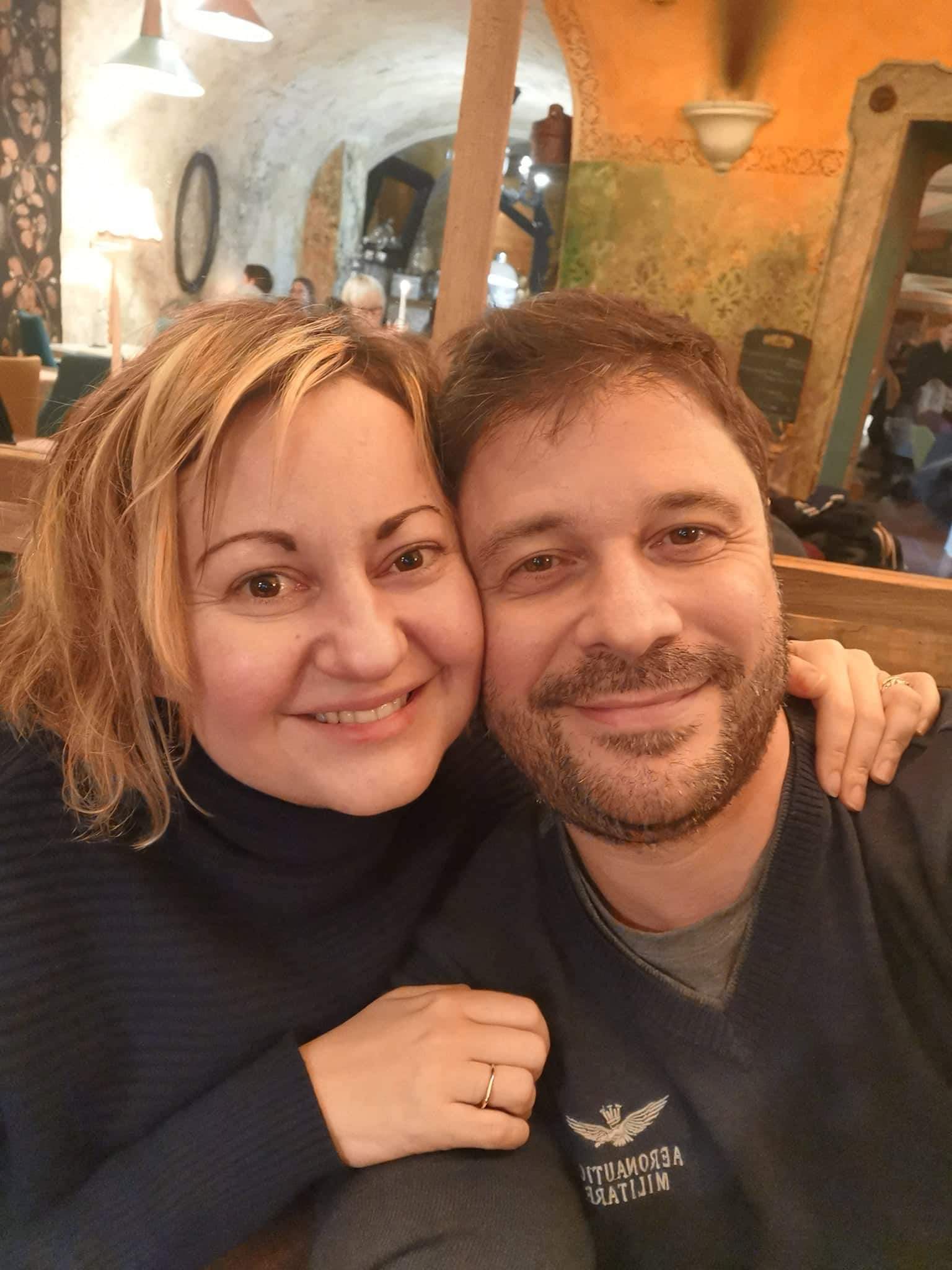 My friend Vlado (Vladimir) was at the hospital with me all the time. His support has been fundamental and helped me maintain my composure and continue to follow my path optimistically.

Vlado and I started looking again, translating more documents and sending inquiries to all the countries we found to be performing proton therapy. We have received responses from several clinics, but one in particular stood out to us: the Proton Therapy Center in Prague. They always answered the fastest and in the most organized way. Not only via email, but also via phone: they always picked up the phone, which was of great importance to me because there was no TIME.

In early December, I visited the Proton Therapy Center for my initial consultation. From the meeting I had there with Dr. Haas, I realized that there was an opportunity to start proton therapy very quickly. However, I first had to obtain the S2 funding (I could not afford the treatment as self-payer). Both Czech Republic (where the clinic is located) and Bulgaria (where I come from) are EU members and the Bulgarian Health Insurance Fund is able to pay for treatment under this agreement.
I immediately submitted the necessary documents to the National Health Insurance Fund (NHIF) for the allocation of funds for treatment abroad. I had to submit, in addition to all my medical records, an offer from the relevant medical institution regarding the costs and duration of treatment. Again, all necessary documents were provided to me very quickly and accurately by the Proton Therapy Center.

I have received the approval for the S2 funding during Christmas! How not to believe in miracles!

Vlado and I arrived to Prague just before New Year’s. We were met at the airport by a car sent from the Proton Therapy Center. Prior to beginning treatment, it was necessary to prepare the radiotherapy plan, fixation mask, etc. This happened on 12/30/2019.
During this time, we met Petra and Susi – the girls who coordinated the whole process. I received information from them on everything, even about things beyond treatment! For example, I was invited to attend a gala evening organized by the Nadační Fond Onkologie. There were doctors, patients and healthcare professionals from the Czech Republic. I went with Petra and we had a lot of fun!

And so my treatment began …
The treatment sessions are short and painless, made with the latest and most modern equipment in the world. I had no side effects except for a slight skin redness in the irradiated area. Every week I had a check-up with Dr. Haas, who took care of me during the whole treatment. Every week I also had a control MRI which allowed the doctors to follow my progress very closely.
Dr. Haas always kept me up to date with my progress. I also had a meeting with Dr. Matz, physicist, who helped me better understand the treatment. He also showed me my treatment plan!

In conclusion, I can say that the extremely fast and adequate response I have received from the Proton Therapy Center, as well as the kindness of all people who took care of me there, definitely met my needs! One feels at ease here. In addition, Prague is a city full of fabulous beauty, which is a treat in its own!

Radiotherapy is essential for treating children’s brain tumours – however conventional radiotherapy treatment increases the risk of permanent cognitive impairment. Memory problems, learning problems, global IQ decline, and other serious cognitive impairments can occur. A new study published in the Journal of Clinical Oncology on the 27th November 2019 has demonstrated the superiority of proton therapy over traditional x-ray/photon radiotherapy in treating paediatric Medulloblastoma.

Medulloblastoma is an invasive, rapidly growing form of tumour, and the most commonly occurring type of brain cancer in children. This study showed that the use of proton therapy in treating these cancers (instead of conventional photon/x-ray radiotherapy) resulted in significantly improved long-term intelligence outcomes in children.

This study provides the strongest evidence to date that proton therapy preserves the intellectual function of children with medulloblastoma – as opposed to traditional x-ray radiation which can cause damage and result in a lower quality of life for children following treatment. The authors of the study concluded:

These results expand on previous research suggesting an intellect-sparing benefit of proton therapy in the treatment of paediatric brain tumors, reported Lisa S. Kahalley, PhD, of Texas Children’s Hospital (TCH) in Houston, and colleagues in the Journal of Clinical Oncology.

“It’s getting very difficult to argue that there isn’t a very strong clinical benefit associated with proton, so now it really becomes an access issue. We have to think really hard about ways to improve access to families that aren’t located near proton centres.”

The Proton Therapy Center in Prague has considerable experience treating children’s brain tumours with protons, and has treated many children suffering from medulloblastoma – including British child Ashya King, who received proton therapy at the Prague Proton Therapy Center after an international manhunt in 2014. Ashya’s story received widespread public attention, and his successful proton therapy treatment in Prague resulted in him having less risk of cognitive problems following treatment.

Every year on 14th February millions of people celebrate Valentine’s day showing their compassion and love for the special people in their lives. When you think of how to express your love on this special day, you may think of flowers, fancy dinners, chocolate, and greeting cards, but this day might be harder to celebrate for those battling cancer. However, it is more important than ever to show your love and support during this time. Here are some ideas that may be a little more low key, but still have a big impact.

❤ Write a love note or poem – express your feelings in writing and let them know how much they mean to you.

❤ Plan an at-home movie night complete with take-away and their favourite snacks.

❤ Buy your loved one a journal so they can write down their emotions and challenges. You can also start your own journal and together write about daily topics or achievements.

❤ Help complete tasks on their to-do list. Cancer can be exhausting and your loved one may need help crossing off some items.

❤ Have a spa night – candles, lotion, face masks, essential oil and a Zen playlist will help set the atmosphere.

❤ Spend quality time with your loved one without any distractions such as electronics, live in the present.

❤ Plan a game night – try a new board game, play charades or have a small tournament with all your favourite games.

❤ Have your own private book club – is there a book you both wanted to read? Get two copies and spend the evening reading and discussing the book.

Are there any ideas that you think we should add to our list? Let us know in the comments ⬇

Proton therapy as part of concurrent chemoradiotherapy may be able to reduce treatment toxicity, but limited data have been so far available comparing results of proton chemoradiotherapy with chemoradiotherapy delivered with photon therapy, and proton therapy remains unproven in this setting. This comparative effectiveness cohort study focused therefore on the rate of severe 90-day adverse events associated with unplanned hospitalisations.

Proton therapy was also shown to be equally effective at treating the cancer – disease-free and overall survival outcomes were similar between the two groups, which included patients with head and neck, lung, brain, oesophagus/gastric tract, rectum, and pancreas cancers.

Before this study, data on the toxicity differences between proton vs photon chemo-radiotherapy have been limited, with relatively small patient numbers, although most studies have found a toxicity advantage and/or dosimetric advantage in favour of proton chemoradiotherapy.