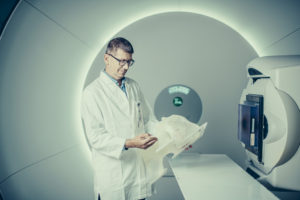 The Prague Proton Therapy Center Medical Team have released their latest results in treating Nasopharyngeal Cancer with Pencil Beam Proton Radiotherapy, entitled ‘Proton pencil‑beam scanning radiotherapy in the treatment of nasopharyngeal cancer: dosimetric parameters and 2‑year results‘. The article was published in the European Archives of Oto-Rhino-Laryngology and Head & Neck in June 2020.

Radiotherapy plays a crucial role in the treatment of nasopharyngeal cancer. Due to the high curability of nasopharyngeal cancer, the focus is now upon preserving quality of life, particularly in view of this high curability, and the long life spans ahead for patients suffering with these particular forms of cancer. Conventional x-ray/photon radiotherapy for nasopharyngeal cancer can cause side effects such as mucositis, dysphagia, skin reactions, weight loss, xerostomia, hearing loss, necrosis of temporal lobes, cranial nerve injury, optical tract impairment, and pain. Modern conventional techniques can reduce these side effects, however hospital admission is still required during radiotherapy or chemoradiation in 42% of cases. Patients with nasopharyngeal cancer are particularly suitable candidates for the healthy-tissue-sparing benefits of proton therapy, due to the high number of sensitive and critical body structures within immediate vicinity of the malignant spread.

40 patients with Nasopharyngeal Cancer were treated at the Prague Proton Therapy Center between 2013 and 2018 using Proton Therapy Pencil-Beam Scanning technology. The purpose of the study according to the authors is to ‘present the feasibility of Pencil-Beam Scanning proton radiotherapy in the treatment of Nasopharyngeal Cancer, dosimetric parameters, early treatment outcomes, as well as acute and late side-effect profiles.’ The median age of the 40 patients treated was 47. The majority of patients treated had locally advanced tumours, and pencil-beam proton therapy was used to treat the primary tumour and the bilateral neck lymph-node areas. 85% of patients received concomitant chemotherapy. The two year overall survival was 80%. Disease-free survival was 75%, and local control was 84%. Acute toxicity was generally mild despite large target volumes and concurrent application of chemotherapy.

Computer tomography (CT) was utilised for treatment planning and image registrations with planning magnetic resonance and positron emission tomography (PET) with fluorodeoxyglucose scans were performed prior to contouring. The contouring of targets and organs at risk was performed using advanced particle therapy (Elektra AB).

Treatment plans were developed with a full optimisation approach and all patients were treated with a three-field arrangement, chosen to maximise reduction of radiation to healthy tissues. All patients were treated using daily image guidance with position corrections performed via a robotic treatment couch. CT check-ups were conducted once weekly. Check-ups were based on image fusion with the planning CT. New plans were prepared when dose distribution changed due to tumor regression changes in cavity contents or changes in patient contours, and were made on an individual basis.

The median follow-up time was 24 months and all patients were treated without interruption. The two-year overall survival, disease-free survival, and locoregional control were 80%, 75%, and 84% respectively. Acute toxicity was evaluated at the last follow-up visit using the Radiation Therapy Oncology Group (RTOG) scale, and was generally mild. Skin toxicity and dysphagia were reported as the most frequent acute side effects. The insertion of a PEG was necessary in four patients. Late toxicity was extremely low across this patient group.

The 2-year overall survival of patients treated in this study was 80% and is comparable to published data for  nasopharyngeal cancer. The doses used in this patient group were similar to those used for conventional (photon) radiotherapy; therefore overall survival is expected to be similar. Importantly, 65% of the patients treated were referred to the Prague Proton Center with highly advanced tumours that excluded the use of conventional IMRT radiotherapy. This patient group was therefore burdened with a sample selection bias of highly advanced cases. With this sample bias of patients with highly advanced cancer in mind, the results are considered very promising. 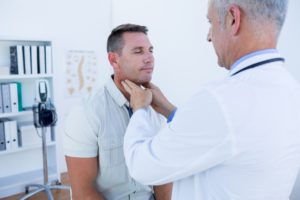 This study supports the results of previous research studies demonstrating the effectiveness of proton therapy in treating nasopharyngeal cancer. Patients with nasopharyngeal cancer appear to be suitable candidates for proton radiotherapy, mainly due to the reduction of acute and late side effects. With respect to the published literature, this study is the largest patient population treated with pencil-beam scanning proton radiotherapy to date.

In conclusion, pencil-beam scanning proton therapy for nasopharyngeal cancer patients is feasible with mild acute toxicity. Treatment plan dosimetry is positive and the treatment outcome is promising despite the high number of patients with extremely advanced disease states. The authors conclude that ‘Proton therapy should be considered in young patients or patients with advanced disease close to critical organs at risk of serious toxicity’. To find out if Pencil-Beam Proton Therapy in Prague is appropriate for you or a loved one, please do not hesitate to contact us.