“My fight for the only right treatment – proton therapy in Prague!”

Samantha Williams, a 22-year-old student from Hitchin in Hertfordshire, was looking forward to completing her studies of animal science at Plymouth University. She loves her studies and wants to work in conservation. But cruel stroke of fate changed her plans completely. Strangely, her destiny wanted her to postpone her final exams and spend several months in hospitals instead. 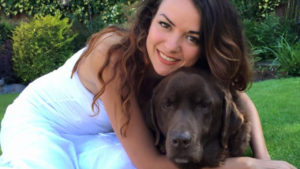 In May 2015 she received the devastating diagnosis, when doctors told her that she had undifferentiated nasopharyngeal carcinoma in her sinuses and lymph nodes. Since then, she has undergone several operations, including the removal of a lymph node, and her wisdom teeth, followed by two bouts of chemotherapy. The British doctors also suggested IMRT which is conventional irradiation.

However, Samantha and her family had known that this treatment could leave her with brain damage, and loss of sight and hearing, due to the close proximity of her brain, eyes and ears to the affected area. At that time, they researched her condition on Internet and came across the advanced option of irradiation by proton beam.

Father of Samantha, Mr Williams told the press: “Radiation therapy may affect everything around the area of the tumour, not just the tumour itself. Proton beam therapy – unlike conventional X-ray photon radiation therapy – stops at a precise point, conforming to the tumour shape and depth, fighting the site of the tumour. This means there’s no exit dose of radiation, preserving normal tissues and organs. For a previously lively woman it could result in avoiding possible brain damage, saving her eyesight, hearing, and facial features.”

Naturally, the family contacted the NHS about Samantha’s treatment. They received a negative reply. Mr Williams added: “The differences in the two types of treatment are like comparing the after-effects of a ‘smart’ bomb, to a ‘carpet’ bomb – laying waste to everything around the targeted area. It’s a disgrace proton treatment isn’t offered on the NHS“, continues Mr Williams. He is also disappointed with the overall approach of the British specialists. “All except one diminish the value of protons. That’s why we have to go to Prague to receive treatment. It costs £65,000 overall, lasting eight weeks” concludes Mr Williams.

Thanks to public donations and a crowd funding website, Samantha managed to raise most of the money to pay for her treatment in Prague.

Her attitude is amazing. She acknowledges the latest advancements of Western medicine but knows what is simple and works for her. “I take no painkillers, but I like to drink hot water with manuka honey for my throat”, she says. She also drinks protein drinks as she lost some weight during her treatment.

Her attending physician, Dr Jiří Kubeš is positive about her treatment: “Treatment of this type of cancer is one of the most difficult. It is incredible that Samantha can swallow anything and does not need painkillers. What is most important, is that the therapy was very well tolerated and the tumour is now in regression.”

“I am grateful for choosing your centre, The UK Proton Therapy team and Dr Kubeš were so supportive from the day one,” says smiling Samantha. “I’m amazed at the kindness and generosity of people so far, I’ve been moved to tears. Despite the difficult times, I felt completely in control of the situation thanks to them. My family was on my side every single day from my 38 visits for proton treatment”, says Samantha.